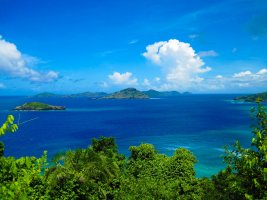 The major economic sectors of Comoros include agriculture, fishing and forestry. The agricultural sector is the most important part of the country's economy, constituting 40% of the GDP, employing 80% of the labor force, and being the source of most exports. Services such as tourism, construction, and commercial activities also contribute to the Comoros GDP.

The main crops cultivated on the Comoros are vanilla, cloves, copra, perfume essences and essential oils. The country is the world's largest producer of ylang-ylang essence used in the production of perfumes. Comoros is, in addition, the world's second-largest producer of vanilla. The main food crops are coconuts, bananas, and cassava.

Comoros have quite rich forest areas, various fruit trees and tropical hardwoods. The island of Grande Comore is specialized in the production of timber.

The main industry of the country is related to the production of perfume essences. There are also other small industries such as printing, carpentry, handicrafts, shoes production and sawmills, which are destined to the internal markets. 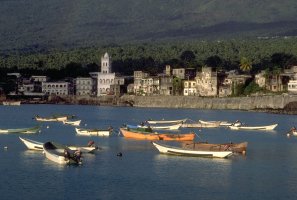 As it was mentioned above, the main source of Comoros exports and the main economic sector is agriculture. However, Comoros is made up of islands and fishing could be a significant part of the country's economy, but the potential of this industry isn't fully explored and realized yet.

Other economic branches, such as tourism, are also slowly developing. Tourists come mainly from France, South Africa and the United Kingdom.

Comoros doesn't have sufficient natural resources and much soils suitable for agriculture, which results in the country's need to import most of the necessary food products. The major imported food product is rice and it is imported in bulk. Other imports, which are also of much higher value than exports, include petroleum, meat, iron, steel and cement.

Comoros represents an archipelago situated in the Indian ocean between Madagascar and Mozambique.  The country's nearest neighbours are Tanzania and the Seychelles. Comoros Islands is a member of the COMESA (a regional trading union of 23 countries with common external tariff), Indian Ocean Commission and African Union.

Comoros Islands apply the COMESA Common External Tariff of 0% for capital goods and raw materials, 10% for intermediate products, and 25% for finished products. The applied tariff on products such as alcohol and tobacco vary from 180%, 200% up to 250%. Goods imported from COMESA members are free from custom duties.

Comoros has a liberalized trade policy with no licenses or quotas on imports and exports. Generally there are two product categories which require an import license: pharmaceuticals and live animals and fresh and dried vegetables. The import license for pharmaceuticals can be obtained from the Ministry of Health. The Ministry of Agriculture issues permits for vegetables. Rice is the only product under state control. Goods coming from the EU countries and Monaco are imported freely, whereas goods imported from other countries need a specific license. Import licenses can be obtained from the Ministry of Economic Affairs. Licenses are valid for 6 months, but also can be extended for another six-months period. Products such as arms and explosives, drugs, literature and products which may affect religion are prohibited to import.

The labelling of products is similar to French labelling regulations. Products should contain all needed identifying marks (port marks etc.) and packages should be numbered. Packing elements which can bring disease into the country are banned.