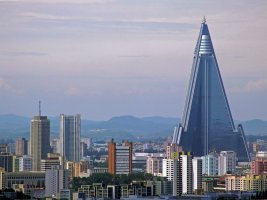 The economy of the Democratic People's Republic of Korea is heavily nationalized. The country has a relatively industrialized economy, the most important industrial sectors being food processing, machine building, chemicals, military equipment, metallurgy, mining, textiles and tourism. Industry accounts for about 50% of the country's GDP and employs (along with the services sector) 65% of North Korea's work force.

Agriculture does not play an important role in the country's economy, as the climate, terrain, and soil conditions are not very favorable for farming. Only about 17% of the total land is arable. The major cultivated crops include rice, corn, soybeans and potatoes. Commercial fishing and aquaculture also have a significant contribution to the country's food supply.

It should be mentioned that tourism is a growing economic sector. 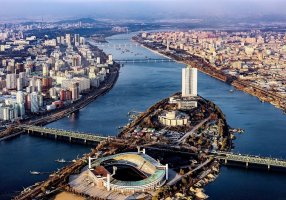 North Korea's economy represents a centrally planned system, in which the role of market allocation schemes is limited. The country's government has experimented with a few market reforms but generally applies a system of a centrally planned and state controlled economy. In the future, North Korea may be attempting modest economic opening by encouraging limited foreign direct investment. Normal foreign trade is minimal, China and South Korea being the country’s most important trading partners.

Official webpage of the DRP Korea

North Korea, officially the Democratic People's Republic of Korea (DPRK), is a country situated in East Asia, in the northern part of the Korean Peninsula. The country is bordered by China, South Korea. North Korea is a member of the Asian Development Bank, Economic Social Commission for Asia and the Pacific, Conference on Trade and Development, International Maritime Organisation and other international organizations.

North Korea has one of the world's least open economies. The country's government does not intend to create an economy which conforms to market laws. It should be mentioned that North Korea is not easily accessible to foreign trade. The DPRK's government imposes strict and unfavourable regulations which create trade barriers. The country's economic relations are restricted to its neighbouring countries -  South Korea, China, Russia and Japan.

Customs Law of The Democratic People's Republic of Korea

- The customs shall strictly supervise and control the transportation of materials to ensure that materials which are not included in the state foreign trade plan or for which license of import or export has not been obtained are not brought into or taken out of the D.P.R.K.

- The calculation of customs duty shall be done in Korean Won according to tariff applied at the time of import or export. The conversion of foreign currencies into Korean Won shall be subject to the exchange rate specified from time to time by the foreign exchange control organ.