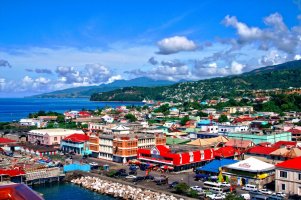 Agriculture is the major Dominica's economic sector and bananas are the main crop cultivated on the island. Dominica exports mostly bananas, but it began to export small quantities of citrus, vegetables, and exotic fruits (mangoes, guavas). The island also developed manufactured exports of soap produced from coconuts, which are quite successful.

Among other important industries fishing and forestry can be outlined. Fishing is a developed industry in Dominica, but it serves the domestic market and isn't destined for export. Forestry also plays an important role in Dominica's economy, as it has a potential for lumber industry (61 percent of Dominica's area is covered by forests).

Dominica's government continues to encourage the development of the economic sector by establishing trading relationships with other countries. The main Dominica's export partners are Jamaica, France, Antigua, Trinidad and Tobago, Saudi Arabia,  Guatemala. 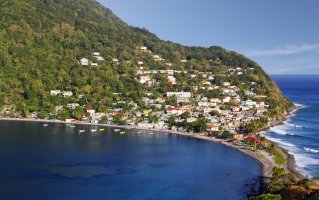 The economy of Dominica grew by 3.5 percent in 2005 and 4.0 percent in 2006 due to the government policies oriented to support the financial sector, diversify agricultural production and develop the productive capital infrastructure. In 2013 Dominica's GDP increased by 0,76 percent generating it the 180th largest economy. It is worth mentioning that the Commonwealth of Dominica became in recent years a leading international financial centre.

Economic development is the first concern of Dominica's foreign relations. Dominica maintains missions in Washington, New York, London, and Brussels. It is also a member of the Organisation of Eastern Caribbean States, United Nations, International Monetary Fund and World Bank.

Dominica, whose official name is Commonwealth of Dominica, is an island situated in the Caribbean Sea between the French islands Guadeloupe and Martinique. Dominica's official language is English and its currency is the East Caribbean dollar. It is a member of the World Trade Organization (WTO), CARICOM, Organization of Eastern Caribbean States, World Bank and International Monetary Fund.

Import tariffs are based on CARICOM's Common External Tariff and range from 0% to 165% for non CARICOM members. The highest customs duty, 165 percent, is applied on paints, varnishes and enamels and the highest tariffs for agricultural products represent 150 percent. A customs service charge (CSC) of 3% is also applied on the c.i.f. value of all imports, except for governmental imports, imports by charitable organizations and diplomatic missions. An environmental surcharge is applied as well: 1.5% on goods in containers made of plastic, glass, metal, paperboard or wood; 1% on motor vehicles less than five years old; 1% on all other goods.

The excise tax at various rates is applied on fuel, alcohol, tobacco, motor vehicles. The VAT represents 15 percent, but it is reduced to 10 percent for hotel accommodation and to 0 percent for some agri-food products (rice, flour, sugar, milk), fuel, orthopedic appliances and invalid carriages.

Labelling rules: the country of origin must be marked on consumer goods. On the package must be indicated the quality, ingredients and net weight. It is important for all sizes and weights to be converted to the metric system.

The importer must present an import declaration (5 copies) containing the following details:

The declaration must be accompanied by the following documents: