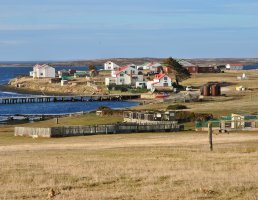 The economy of the Falkland Islands ranks 222nd by GDP and 10th worldwide by the GDP per capita. The main economic sectors are fishing, sheep farming and tourism. Falkland Islands are known for the production of high quality wool, using sheep breeds such as are Polwarth and Corriedale. The fishing industry contributes about 50% and 60% of the annual GDP. Agriculture also contributes significantly to the country's GDP and employs about a 1/10 of the population.

Tourism is estimated to be the second major economic field of the Falkland Islands. The development of this economic sector is due to the increased interest in Antarctic exploration. The main tourist attractions are the archipelago's wildlife and environment, and activities such as fishing and wreck diving. Drilling represents a potential source of revenue, as there are four sedimentary basins that could contain hydrocarbons. These basins are the North Falkland Basin, Falklands Plateau Basin, South Falklands Basin and Malvinas Basin.

The Falkland Islands is the world's 178th largest exporter. The Island's main exports include wool, hides, fish and squid, molluscs, sheep and goat meat. The top export partners are Spain, the USA, South Africa, the UK and the Czech Republic. 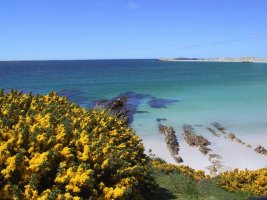 Falkland Islands' main sources of revenue include tourism, commercial fishing, servicing the fishing industry as well as agriculture. Analyzing the island's trade, it must be noticed that a limited amount of goods are produced on the Falkland Islands, and most should be imported. Such products include petroleum products, food, vehicles, machinery, construction materials and other. In addition the country has limited transport links to the rest of the world, with regular shipping services to South America and the United Kingdom.

The United Kingdom is the main import partner of the Falkland Islands with 87% of all imported goods coming from the UK, the rest of the goods being mostly imported from Chile and Uruguay. The Falkland Islands is the world's 195th largest importer, its main imports being fuel, building materials, clothing, planes, helicopters, spacecraft, ships, cars and iron structures. The top import partners of the country are the UK, Greece, Russia, Spain and the US.

The Falkland Islands are an archipelago situated in the South Atlantic Ocean on the Patagonian Shelf. The Islands represent a British overseas territory, with an internal self-governance. The UK takes responsibility for the islands' defence and foreign affairs.

The Falkland Islands are not part of the European Single Market. However, according to the current overseas association decision (OAD) the Islands have:

- full freedom of access to the EC market for products originating in the OCTs;

- free access to the EC market for non-originating products in circulation in the OCTs after the EC customs duty has been paid;

- OCTs may give preference to their inhabitants for trade in services.

Import licenses from the Department of Agriculture are required for plants, fish, poultry and dairy products. Live animals can be imported only if they have import licenses and veterinary health certificates. Meat and meat products require a Food of Animal Origin (FOAO) import permit. All plants and plant products require a plant import permit and a phytosanitary certificate.

Import licenses are equally required for the importation of firearms and ammunition.

The following documents are required while importing goods into the Falkland Islands:

- commercial invoice - including a full and accurate description of the products, first six digits of the commodity code (HS Code), transport details; weights and dimensions; value and currency, the shipping term (ex. Incoterms); country of origin; name and address of the manufacturer.

The Falkland Islands come under the Overseas Countries & Territories agreement with the EU, so that importers may need an EUR1 Form.