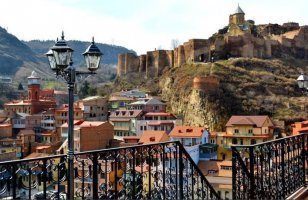 Georgia is estimated the 63rd most complex economy according to the Economic Complexity Index. It is a free market economy, in which the agricultural sector plays the major role, employing 55 percent of the labor force and representing 7 percent of the country's GDP.

Georgia's main economic sector is agriculture, with viticulture being the most important branch. On this territory are cultivated about 450 species of vine and Georgia is recognized as one of the oldest winemaking places. In this context should be mentioned that vines and alcoholic beverages are in the top ten Georgia's exports. Another important agriculture field are nuts. They represent 6 percent of total exports and are exported in 53 countries.

Georgia has abundant hydro resources and has a great hydroelectric potential, which satisfies most of its energy needs. The country also has considerable amounts of spring waters and as a result the production of mineral waters is one of the main industrial sectors.

Georgia also produces mining of manganese, copper, and gold. It is the largest producer of clay and a leading producer of building and crushed stone.

It is worth mentioning that tourism is a fast growing economic sector as well, as in the recent years the number of visitors increased significantly.

Georgia has good relations with its neighbouring countries and is a member of the United Nations, the Council of Europe and the WTO. Georgia's main export partners are: Armenia, Azerbaijan, Bulgaria, Russia, Ukraine, US, Canada. 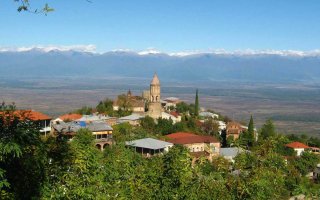 Georgia is world's 115th largest importer and 124th largest exporter. The country has an advantageous geographical position, as it has access to important terrestrial and maritime transport routes. Import and export activities are encouraged by a stable economic progress and a free market. Georgia’s foreign trade increased by 5 percent in 2014 compared to 2013 and trade with the EU increased by 2%.

Georgia's liberal foreign trade policy gives investors the possibility to do business easily. The country has low import tariffs and simple customs procedures, thus being and an opportune trade destination.

In 2010 the World bank named Georgia "the number one economic reformer in the world". This title appeared due to the fact that it took only one year to improve the country's position from 112th to 18th in the list of states with the highest ease of doing business. Georgia reduced import/export licenses by 90 percent and permits are required only for dangerous products and services.

Georgia is a Eurasian country situated between the Greater and Lesser Caucasus mountain ranges. The country is bordered by the Black Sea, Russia, Armenia, Azerbaijan and Turkey. Georgia is a member of Council of Europe, World Trade Organization, Asian development bank, Organization of the Black Sea Economic Cooperation, Community of Democratic Choice.

Georgia has one of the most liberal foreign trade policies in the world, which is characterized by low import tariffs and simple customs procedures. The are no import tariffs for around 85 percent of products and there are no seasonal tariffs. However, an 18 % value added tax is applied to imported products. Georgia has a Free Trade Regime with all CIS members and Turkey, which means there are no custom import taxes between these countries.

There are no restrictions of licensing requirements or other non-tariff barriers, except for necessity to protect public health, national security and environment. Here are some of the products which need an import license: products of floral origin subject to phytosanitary control, products subject to veterinary control, endangered wild flora or fauna specimens, nuclear, radioactive objects, military equipment etc.

Packaging/Labelling: the following information must be presented on the package: the name of the product in English, product ingredients, declaration of quantity (weight, volume), the physical address of the manufacturer, nutrition facts, allergen declaration, handling conditions (ex. Keep frozen), product code and manufacturing day.

The following documents are needed when exporting/importing to Georgia:

- Export and Import declaration (an official document which contains the detailed information on product, exporter and importer)

- Export and import licenses and permits

A detailed list of products requiring a license and ministries where the permits are granted can be found here: http://www.economy.ge/uploads/kanonmdebloba/sagareo_vachroba/ILPs_GEORGIA_nj.pdf