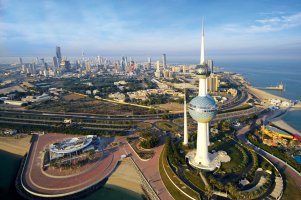 Kuwait is the world's 47th most complex economy and the 40th largest export economy. It is has a petroleum-based economy - crude petroleum, refined petroleum and petroleum gas being its main exports. Petroleum industry represents about 50 % of the Kuwait's GDP and it is the main source of the country's income. Other major industries include water desalination, shipping and financial services.

Kuwait has a well developed banking system - the National Bank of Kuwait is one of the largest banks of the Arab countries.

The agricultural sector represents only 1% of the country's economy and 8 % of the gross domestic product, due to the limited arable land and water reserves. The agricultural sector mainly produces fruit and vegetables for the internal consumption. Fishing is a large scale commercial industry, as the territorial waters are full of seafood. 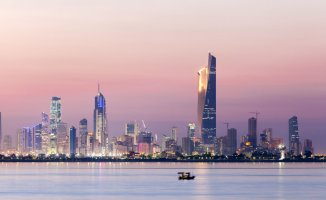 The economy of Kuwait is a high income economy, the country having the 4th per capita income in the world, according to the World Bank. What is more Kuwait's currency is the world's most expensive currency unit.

The country's economy is relatively open to trade, Kuwait's first free-trade zone being inaugurated in 1999. Kuwait has a predominantly oil based economy, accounting for 6% of the world’s proven oil reserves. At present, one of the major objectives of the Kuwaiti government is the diversification of the economy and industrial sectors.

Kuwait is a country situated in Western Asia, bordering Iraq and Saudi Arabia. Kuwait maintains strong international relations with most countries. It is a member of the World Bank, International Monetary Fund, WTO, General Agreement on Tariffs and Trade, African Development Bank, Arab Monetary Fund, Council of Arab Economic Unity and Group of 77.

A tax of 4% is applied on the c.i.f. value of all imports plus 1% of the goods value. Generally, the tax varies from 15 to 25% on all imported goods. The importer also will have to pay the transit duty, which constitutes 2% ad valorem.

Products such as agri-food goods, basic consumer products, most live animals, machinery, spare parts and all raw materials are free from customs duties.

On the contrary, goods such as ACR batteries, roofing felt, wooden and steel furniture, aluminium doors and windows, paint, are subject to a protective tariffs, which can vary up to 25%.

Products such as pork, alcohol, gambling machines and products of Israeli origin are prohibited.

Live animals and animal products being imported must have health certificates. Food products must be followed by a certificate proving that the goods do not contain cyclamate compound.

Labelling: the imported goods must be clearly labelled with the country of origin and food products should carry a label in Arabic. Outer containers must have a distinguishing mark containing: package number, cable address of the importing agent, country of origin. Outer packaging must contain a description of the product in Arabic, and a description in English is also permitted. The packing list should contain the following details: invoice number, marks and number, gross weight of total cargo, description and type of goods, statistical code of the goods, total package of each type, packing type of each type, total units and gross/net weight of each type. Products that cannot be labelled individually (such as fruits) may have a sticker attached or their packaging labelled instead. The information must form an integral part of the label (stick-on labels are not acceptable). Food labelling must include: the name of the product, the ingredients, the date of production, the expiry date, net and gross weights, country of origin.

Note: the original commercial invoice, original certificate of origin and original packing list must be legalised by the Kuwait Embassy/Consulate and should be attested by the local chamber of commerce.

Export Portal No 1 Import Export Source
© 2020 ExportPortal.com
All rights reserved.
We are a proud member of EXIMA (Export Import Association)
Follow
PARTNERS
© 2020 ExportPortal.com. All rights reserved.
Select language
English 简体中文* 繁體中文* Español* Русский* Français* Deutsch* Italiano* Română* हिंदी* עִברִית* Tiếng Việt* සිංහල* தமிழ்* Shqiptar* عربى* Português*
*
The content of the current page in this language is automatically translated by Google. Our team of skilled linguists and interpreters is currently working on providing a higher-quality translation.
Share Up
This website uses cookies to ensure you get the best experience on our website.
Learn more
Got it!
System Message