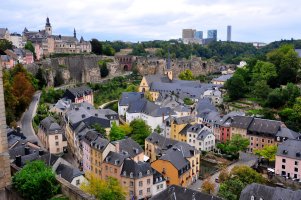 Luxembourg is one of the smallest countries in Europe, and ranked 179th in size of all the 194 independent countries of the world; the country is about 2,586 square kilometres in size.

To the east, Luxembourg borders the German Bundesland of Rhineland-Palatinate and Saarland, and, to the south, it borders the French region of Lorraine.

Products imported by Luxembourg are: 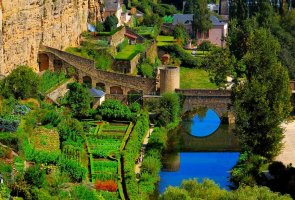 Luxembourg, officially the Grand Duchy of Luxembourg, is a landlocked country in Western Europe. It is bordered by Belgium to the west and north, Germany to the east, and France to the south. Luxembourg had a population of 524,853 in October 2012 and has an area of 2,586 square kilometres, making it one of the smallest sovereign nations in Europe.

Luxembourg, sometimes poetically called the "Green Heart of Europe", is amongst the wealthiest countries in the world. The industries that bring Luxembourg its economic success are: banking, steel, telecommunications, agriculture and tourism. Luxembourg's economy success is also largely based on export trade.

Luxembourg is among few economically stable countries that exports in excess of fifty percent of its gross domestic product. Some other important names in this regard are Belgium, Netherlands, Slovakia, Austria, Hungary, Denmark, Ireland, Sweden and Czech Republic. Luxembourg has especially close trade and financial ties to Belgium and the Netherlands and as a member of the EU it enjoys the advantages of the open European market.

Luxembourg is a landlocked country in western Europe. The country is a founding member of the European Union, OECD, United Nations, NATO, and Benelux, reflecting its political consensus in favour of economic, political, and military integration. The city of Luxembourg, which is the country's capital and largest city, is the seat of several institutions and agencies of the EU. The economy of Luxembourg is largely dependent on the banking, steel, and industrial sectors.

Luxembourg is part of the harmonised trade system of the EU and importing and exporting are covered by EC Regulations.

A Common External Tariff (CET) is applicable to other countries.

The European Community has created the Binding Tariff Information (BTI) system as a tool to obtain the correct tariff classification for goods for import or export. Before shipping any goods, it would be better to consult the Luxembourg Customs.

The Customs and Excise Agency is responsible for the collection of:

Trade with certain countries is forbidden or restricted in accordance with UN, EU or OSCE sanctions.

All labelling and information directives of the European Council must be met, as well as local and national regulations. Information on the labelling of products in the interest of consumers and compliance procedures are available at Summaries of EU Legislation.

For organic produce, EU legislation requires that imported organic food from third countries be produced to the same standards as that from or EU. For more information, visit ILNAS and OSQCA.

There are controls on a number of imported products. For more information, visit Luxembourg Import Declaration.

All goods shipped from outside the European Community to Luxembourg must have a Commercial Invoice and must contain or reference the following information:

Invoices are required for all dutiable shipments relating to commercial transactions between companies; companies and individuals, regardless of the value.

Commercial invoices should show freight, insurance and similar charges as separate items when applicable, regardless of the INCOTERM (International Commercial Terms of Sale) used on the transaction. It can be in any official language for import shipments and if required by customs, must be accompanied by a translation. When translations are requested, a party who is knowledgeable of the transaction must furnish it.

To order bills are acceptable and bills of lading should bear the name of the party to be notified. The consignee must have the original bill of lading to take possession of the goods. Express bills of lading are also acceptable.

Mail and parcel post shipments require postal documentation in place of bills of lading and air cargo shipments require airway bills. The number of copies issued depends on the requirements of the importer and the airline. As a guide, follow IATA and/or International Civil Aviation Organisation regulations governing labelling and packing of dangerous and restricted goods.