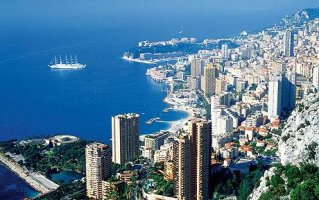 Monaco, officially the Principality of Monaco is a sovereign city-state and microstate, located on the French Riviera in Western Europe. France borders the country on three sides while the other side borders the Mediterranean Sea. Monaco has an area of 2.02 km2 and a population of 36,371; it is the second smallest and the most densely populated country in the world.

Monaco is a popular resort, attracting tourists to its casino and pleasant climate. The principality also is a banking center and has successfully sought to diversify into services and small, high-value-added, nonpolluting industries. The state retains monopolies in a number of sectors, including tobacco, the telephone network, and the postal service. Living standards are high, roughly comparable to those in prosperous French metropolitan areas.

Chief exports of Monaco include cosmetics, pharmaceuticals, glassware, precision instruments, fine processed foods, cards and postal stamps, and various re-exported commodities. Also essential oils, cosmetics and perfumes are produced in Monaco, and these goods are exported to other countries, including the United States. Additionally, artwork and antiques are also exported to America. 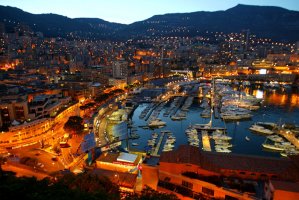 Monaco's import industry is smaller than its export industry. As of 2014, the area's largest trading partners were countries in the European Union. Monaco trades most of all with the United States and China.

Main imports of Monaco are energy, automobiles, equipment, and consumer goods. Monaco imports gemstones and precious metals from America as well as cars, trucks and other vehicle materials.

There are no arable lands or other agriculturally suited areas in the principality; virtually 100 percent of the Monaco territory is heavily urbanized. Accordingly, there is no commercial agriculture in the country. All foods are imported to Monaco and some of them are further processed and exported. The principality is completely urbanized. It has some manufacturing plants, but mostly, the area is a tourist region that attracts affluent vacationers due to its casino-rich culture and a pleasant climate. Monaco imports and exports through a full customs integration with France, and France collects and refunds all customs duties and tariffs. The residents of Monaco do not pay income taxes, which makes this small area great for getting good deals on imported items. Those who work in the import and export industry especially benefit from the lack of income taxes.

Monaco, a small independent hereditary principality in Western Europe, is located on the Mediterranean Sea along the southern coast of France, which is also known as the French Riviera or Côte d'Azur.

The import of fresh meat and milk products from non-EU countries is prohibited.

Monaco is not a member of the EU, but has close economic and political ties with France and is part of the European Union customs zone.

Customs regulations in Monaco are the same as in France.

ATA booklets, which make it possible to avoid payment of the CCT (Common Custom Tariff) or the VAT, are very useful to businessmen carrying samples.

For trade fairs, tests or repairs, a temporary import regime followed by re-exporting within 24 months is used. The customs officer must secure a bond guaranteeing the orderly conducting of the operation. He receives customs document IM5.

Temporary importing may also be done under an active development regime (under IM5). For example, durum wheat can be imported to EU without payment of duty or VAT, and the derived products (pasta) re-exported from the EU.

There is also a customs warehousing regime (IM7).

Sending samples not accompanied by a traveller require a pro-forma invoice. A symbolic customs value may be placed on this invoice; customs administration will assign a commercial value for calculating duty and VAT.

Samples of animal or plant products not accompanying a traveller must comply with all of the sanitary and phytosanitary regulations, be accompanied by a certificate and pass the inspection visit.