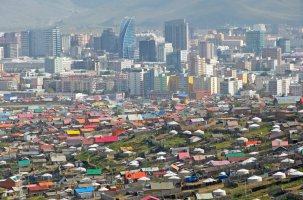 Mongolia is a landlocked country in east-central Asia. It is bordered by Russia to the north and China to the south, east and west. Ulaanbaatar, the capital and also the largest city, is home to about 45% of the population. Mongolia's political system is a parliamentary republic.

Ever since Mongolia joined the World Bank in 1991, the International Development Association has helped the country with more credits. Mongolia is also a member of the World Trade Organizations (WTO).

Industry of Mongolia is based upon processing of forestry, animal, and fishery products, building materials, food and beverage, mining (particularly coal).

Mongolia exports primarily fuel, minerals, metals, and raw materials, including foodstuffs. Agricultural products initially made up most of the exports, but they decreased in importance as exports of minerals expanded after 1970. Exports of processed foodstuffs and such consumer goods as woolen blankets and leather clothing increase constantly.
Mongolia's major export partners are China, Canada, UK, Luxembourg, USA and Russia. 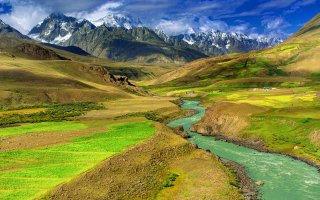 For most of the 20th century, Mongolia was sealed off from the world. The 21st century promises the polar opposite as Mongolia has opened up to the world, its citizens are travelling the globe and outsiders are arriving for business in Mongolia and travel opportunities. Visas are relatively easy to acquire; a handful of nationals won't even require one. Authorities see tourism is a key growth sector of the Mongolian economy and an important revenue earner for local communities. This is still a developing country with rudimentary infrastructure and mostly basic facilities outside the capital.

Small-scale processing of livestock and agricultural products has historically been a mainstay of Mongolia's industrial sector.

Mongolia's industrial development has been severely affected by dwindling imports of fuel, spare parts, and equipment formerly obtained from the former USSR and allied trading partners.

As of 2002, the production of food, leather, shoes, glass, and garments were on the decline, while production of copper and molybdenum concentrates, coal mining, and the food and beverage industries were increasing. About 72% of the economy had been privatized by 2000.

Mongolia has been one of the world's fastest growing economies in recent times, driven by the foreign direct investment. Mongolia maintains positive relations and has diplomatic missions in many countries such as Russia, the People's Republic of China, India, North and South Korea, Japan, and the United States. The government has focused a great deal on encouraging foreign investments and trade.

Mongolia does not impose export taxes. China has provided a ready market for much of Mongolia’s mineral exports as there are no duties. Mongolia can serve as a gateway to nearby markets if you have a Mongolian partner, or are part of a joint venture.

Import duty is payable at the rates from 0% to 25% on the customs value of imported goods. Most goods are subject to 5%. Normally customs value is calculated on the Cost, Insurance and Freight (CIF) value.

Mongolia and Japan have signed an Economic Partnership Agreement. All Mongolian exports to Japan will be exempt from duties when the agreement comes into force in 2015.

No approval is required to import goods into Mongolia, but the importer must be registered with the tax authorities and the State Registry Office. Imports to Mongolia are not subject to restriction, with the exception of import licensing, which applies to only a few products, as well as other products subject to import prohibition.

Pursuant to a series of government resolutions, in general, the limited licensing system in place is for the protection of human health, animal and plant health and safeguarding national security. Import licenses are required for imports of certain products, including chemicals, human blood and organs, explosives and guns. Import licenses for restricted products are issued by the sectoral ministries, such as the Ministry of Environment, Ministry of Education, Culture and Science, Ministry of Food and Agriculture and the Ministry of Health. Products prohibited for import into Mongolia include certain drugs, narcotics and spirits.

Custom duties must be paid following the completion of the final customs clearance. Under the Customs Tariff Law of 2008, Mongolia’s customs tariffs consist of general, most favored nation (MFN) bound and applied. Customs tariffs are calculated ad valorem on c.i.f. values of imports. An ad valorem MFN tariff rate of 5 per cent is applied to most imported goods.

However, a zero tariff rate is applied to 49 other tariff lines, including live animals for breeding, horses, cows, pigs, sheep, goats, information dissemination equipment and its spare parts, other machines for information development, transistor diodes and similar transistors and various medical equipment. A seasonal import duty rate of 15 per cent is applied on flour and vegetables to protect domestic producers between 1 August and 1 April. Outside of this period the rate is 5 per cent. Mongolia bound all its tariffs at 20 per cent for most tariff lines.

A flat customs tariff of five per cent applies in respect of goods imported, with the exception of livestock, computer technology and medical devices which are zero per cent. Heavy machinery and equipment purchased and imported by entities investing in priority sectors, with foreign sourced funds are exempt. Export duties apply to certain exported goods such as waste iron, aluminium, copper and brass.

VAT is imposed at the rate of 10 per cent on the supply of taxable goods and services within the territory and on imports into Mongolia.

There is a list of goods and products that is subject to special import permits/licenses and/or approvals by the relevant government organisations.

Labels of imported food must be written in Mongolian, Russian or English. Only a registered legal entity of Mongolia is allowed to import food (not individuals). An Exporter needs to conclude an agreement with a Mongolian importer that introduces quality management and standards for agricultural, food and health.