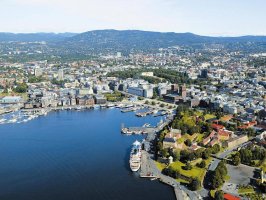 Economy of Norway is a mix of market economy and a Nordic welfare model with universal health care and a comprehensive social security system. Norway has rich reserves of petroleum, natural gas, minerals, lumber, seafood, fresh water, and hydropower. The petroleum industry accounts for around a quarter of the country's gross domestic product. The country has the fourth-highest per capita income in the world on the World Bank and IMF lists. On a per-capita basis, it is the world's largest producer of oil and natural gas outside the Middle East. Today, Norway ranks as the second-wealthiest country in the world in monetary value, with the largest capital reserve per capita of any nation.

Norway is a major shipping nation and has the world's 6th largest merchant fleet, with 1,412 Norwegian-owned merchant vessels. Shipping has long been a support of Norway's export sector, but much of Norway's economic growth has been fueled by an abundance of natural resources, including petroleum exploration and production, hydroelectric power, and fisheries.

Export revenues from oil and gas have risen to almost 50% of total exports and constitute more than 20% of the GDP. Norway is the fifth-largest oil exporter and third-largest gas exporter in the world, but it is not a member of OPEC.

Foreign trade amounts to approximately 37 per cent of Norway's GDP. Norway is currently among the world's top exporters in the seafood, crude oil and shipping services sectors, and has significant market shares in the light metals and ship equipment sectors, as well as in a number of maritime services such as classification, consulting and marine insurance. Leading export markets are United Kingdom and Germany.

Crude oil, natural gas and electricity account for 65% of all exports. According to current estimates, Norway has oil for the next 50 years and gas for the next 100 years. 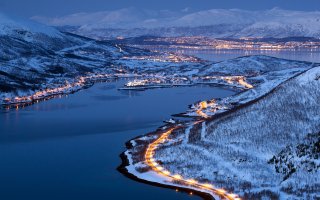 The Norwegian economy is an example of a combined economy, a prosperous capitalist welfare state and social democracy country featuring a combination of free market activity and large state ownership in certain key sectors. The state income derived from natural resources includes a significant contribution from petroleum production.

Norway is a sophisticated and established market having a long and trusted trading relationship with the UK ans bordering Scandinavian countries. It has an educated and technologically advanced society looking for high quality products and services. Norway is a market for importing clothing, accessories, footwear, food and drink, gift ware, furniture.

Norway is a sovereign and unitary monarchy whose territory comprises the western portion of the Scandinavian Peninsula plus Jan Mayen and the Arctic archipelago of Svalbard. The country shares its borders with Sweden, Finland, Russia, the Skagerrak Strait and Denmark. Norway is a member of the Council of Europe, Council of the Baltic Sea States, Euro-Atlantic Partnership Council, European Free Trade Association, International Chamber of Commerce, World Trade Organization and other international organizations.

Trade is regulated by a number of agreements and rules, such as the European Economic Area (EEA) agreement and World Trage Organization (WTO) agreements. They set out the conditions for selling goods and services, including what tariffs and duties are to be included in the price paid by the consumer in Norway.

The European Community has created the Binding Tariff Information (BTI) system as a tool to obtain the correct tariff classification for goods for import or export.

Trade with agriculture produce, food and fish is regulated in separate agreements within the European Economic Space (EES) treaty.

For legal reasons, all information given is always non-binding and relates exclusively to the customs regulations that apply in Norway.

Imports on a number of items are restricted. For more information on import licensing, quotas and restricted goods, visit Norwegian Customs.

Through the EES treaty, Norway is a part of the EU single market and is included in the EU laws regarding products such as: toys, machinery, medical technology products, pharmaceuticals.

To reduce the impact on the environment, the EU has required legislation concerning the management of packaging and packaging waste.

All labelling and information directives of the European Council must be met, as well as local and national regulations.

Food information and labelling legislation must comply with EU legislation.

Medicines are subject to special labeling requirements determined by the The Norwegian Medicines Agency.

Health certificates issued by the approved authority in the country of origin must accompany shipments of animals, plants and their products. Hay, straw and similar products used for packing must be accompanied by a sanitary certificate signed by a veterinary authority, public notary or similar authority and certified by a Norwegian consul.

Import licences are required for a definite range of items. They are issued by the Ministry of Foreign Trade and in certain cases, by the Ministry of Fisheries. The validity period is usually not less than three to six months, depending on the terms of sale.

A state owned firm, Vinmonopolet, has the retail monopoly on alcoholic beverages.

Quotations can be in Euro or Norwegian Kronor (NOK) or a currency as agreed between parties.

The majority of import transactions by Norwegian customers, especially those involving large distributors, take place under seller-buyer terms, such as the common 30, 60, 90 day accounts, or payment against documents. The most popular payment mechanism by which importers remit payment to their foreign suppliers is via electronic funds transfer.

The letter of credit is still used in some industry sectors, but now covers a fraction of total imports. Largely due to its cost and time requirements and the ease in obtaining credit ratings in Norwegian, which increases transparency and transactional safety.

- Commercial invoice (minimum of two copies are required) including:

Many importers are authorised to use a Simplified Declaration Procedure (Immediate Release System) and may have special requirements about the presentation of invoice data. Veterinary certificates and/or plant protection certificates are required for agricultural products and foodstuffs.

Subject to detailed regulations and controls, the following imports must be accompanied by special certificates:

Imports of drugs, pharmaceuticals and nutritions are strictly controlled.

Insecticides, fertilisers, additives and other potentially dangerous chemical substances for general sale are restricted by law. Substances have to be approved and registered with Norwegian government agencies after testing to determine whether the product is safe for normal trading.