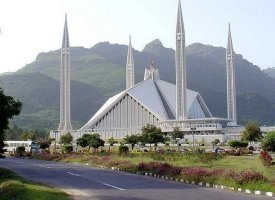 Pakistan is considered as a developing country and is one of the Next Eleven, the eleven countries that, along with the BRICs, have a high potential to become the world's largest economies in the 21st century.

Pakistan is a net food exporter, except in occasional years when its harvest is adversely affected by droughts. Pakistan exports rice, cotton, fish, fruits (especially oranges and mangoes), and vegetables. The country is Asia's largest camel market, second-largest apricot and ghee market and third-largest cotton, onion and milk market.

Pakistan's industrial sector accounts for about 24% of GDP. Cotton textile production and apparel manufacturing are Pakistan's largest industries, accounting for about 66% of the merchandise exports and almost 40% of the employed labour force. Other major industries include cement, fertiliser, edible oil, sugar, steel, tobacco, chemicals, machinery, and food processing.

The textile industry has the main position in the exports of Pakistan. Pakistan is the 8th largest exporter of textile products in Asia. Pakistan is the 4th largest producer of cotton with the third largest spinning capacity in Asia after China and India, and contributes 5% to the global spinning capacity. China is the second largest buyer of Pakistani textiles, importing US$1.527 billion of textiles last fiscal. China buys cotton yarn and cotton fabric from Pakistan. 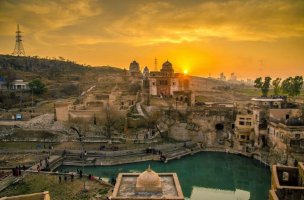 Pakistan is a rapidly developing country and is one of the Next Eleven, the eleven countries that, along with the BRICs, have a high potential to become the world's largest economies in the 21st century. However, after decades of social instability, as of 2013, serious deficiencies in macromangament and unbalanced economics in basic services such as train transportation and electrical energy generation had developed.

The economy of Pakistan is semi-industrialized, with centers of growth along the Indus River.  According to the World Bank, Pakistan has important strategic endowments and development potential. The increasing proportion of Pakistan's youth provides the country with a potential demographic dividend and a challenge to provide adequate services and employment.

Pakistan's economy is the 26th largest in the world in terms of purchasing power parity (PPP), and 41st largest in terms of nominal Gross Domestic Product. Pakistan's undocumented economy is estimated to be 36% of it's over all economy, which is not taken into consideration when calculating per capita income. Pakistan is a developing country and has a potential to become one of the world's large economies in the 21st century.

The Government of Pakistan has granted numerous incentives to technology companies wishing to do business in Pakistan. A combination of decade-plus tax holidays, zero duties on computer imports, government incentives for venture capital and a variety of programs for subsidizing technical education, are intended there.

Federal Board of Revenue of Pakistan

The government of Pakistan is implementing a program of tariff reduction in line with obligations that are part of the World Trade Organization entry. The general tariff rate is expected to drop to around 30 per cent.

Items banned for import to Pakistan include:

Certain restricted items can be imported only if the stipulated conditions are met. Most of the restricted items need prior approval or certification from the relevant government agency. Some of the main items include:

Wheat is now importable by the private and public sector. Government has recently imposed a duty of 20% on the import of wheat to discourage wheat import and protect local produce.

Packaging should be conspicuously marked with the country of origin and the name of either the manufacturer or the importer. For textiles this is especially important and the yardage, width and length (if in roll) should also be clearly marked.

Dyes and chemicals must be marked with a full description, including quality and code numbers.

Packets of cigars, cheroots, cigarillos and cigarettes of tobacco or of tobacco substitutes should carry the warning: 'Smoking is injurious to health'.

Food colours must carry fair and true labelling about the product.

Labels on packages for edible products should show that they have at least six months or 50% of the shelf life, whichever is the lesser, calculated from the date of filing of Import General Manifest (IGM) and also that they are free of Haram elements or ingredients. Where these conditions are not printed on the packaging, certificate issued by the manufacturers or principals in respect of these conditions shall be accepted by customs.

Livestock must be accompanied by a sanitary certificate issued by the approved authority in the country of origin.

All plants and plant products, except fruit and vegetables, require a phytosanitary certificate issued by the approved authority in the country of origin.

Hay or straw used as packing material for plants or seeds must be covered by the phytopathological certificate issued by the approved authority in the country or origin.

Leaf tobacco must be covered by additional certification indicating that it is free from ephestiam elutella or that this pest does not exist in the country of origin.

Used clothing should be accompanied by a certificate of cleanliness signed by a physician with the letters MD following the signature.

A special certificate of alcoholic strength may be required for imports of spirituous beverages.

A supplier's certificate or quality and price are required for certain items.

Quotes should be cost and freight (C&F) port of delivery in US dollars. Payment must be made by irrevocable letter of credit.

Invoice must be signed by the manufacturer or shipper and must show:

Except where it is not possible to do so (bulk items or where products are marketed under generic names) the invoice shall give the brand name of the product being imported.

A signed declaration of origin is required.

To Order bills are acceptable and must show:

Not obligatory, but facilitates clearance.

Although not legally required, the importer or their bank frequently requests this document. If not provided, a statement of origin should appear on the invoice.

The import of livestock, plants and plant material is subject to specific regulations.

Arms and ammunition not otherwise banned would require authorisation from the Ministry of Commerce.

Ingredients for formulation or manufacturing of pesticides are importable only by industrial users.

The importer must arrange insurance through an insurance company registered in Pakistan.