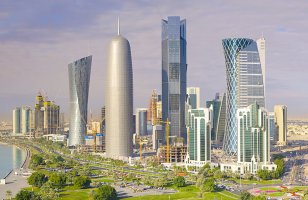 Qatar is now the richest country in the world. Petroleum and liquefied natural gas are the cornerstones of Qatar's economy and account for more than 70% of total government revenue, more than 60% of gross domestic product, and roughly 85% of export earnings. Proved oil reserves of 15 billion barrels should ensure continued output at current levels for 23 years. Oil has given Qatar a per capita GDP that ranks among the highest in the world. Qatar's proved reserves of natural gas exceed 7000 km3, more than 5% of the world total and the third-largest reserves of any country in the world. Production and export of natural gas are becoming increasingly important. Long-term goals include the development of off-shore petroleum and the diversification of the economy.

Before the emergence of petrol-based industry, Qatar was a poor pearl fishing country. The exploitation of oil and gas fields began in 1939. In 1973, oil production and revenues increased crucially, moving Qatar out of the ranks of the world's poorest countries and providing it with one of the highest per capita incomes in the world.

The government considers industry to be an integral part of its plan to diversify the economy and maximise its huge natural gas reserves, which serve as the primary feedstock for the sector. Accordingly, careful planning has gone into industrial development. With an eye towards exports, development has been clustered around the ports of Ras Laffan Industrial City and Mesaieed Industrial Area, which are key centers of energy. The result has seen considerable growth over the years. Industries Qatar (IQ), a producer of petrochemicals, fertilisers and steel, is a regional powerhouse, surpassed only in size by Saudi Basic Industries Corporation (SABIC), the Middle East's largest chemical producer. In 2007 the manufacturing sector made the third-largest contribution to GDP among non-oil and gas sectors, equivalent to about 7.5% of GDP. Petrochemicals and fertilizers supply make up a large portion of the industrial base, along with steel and other construction materials, through Qatar Steel and Qatar Primary Material Company (QPMC). 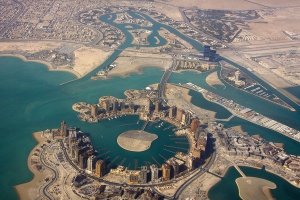 Qatar has prospered in the last several years with continued high real GDP growth. GDP was driven largely by the oil and gas sector however growth in the construction and financial services sectors have pushed the non-oil component to just over half of Qatar's nominal GDP for the first time since 2000.

One of the areas where Qatar heavily depends on imports is food, as the country only produces about 10% - 15% of its demand, which naturally presents a food security issue. Biggest volumes come through Saudi Arabia and UAE, with this being one of the tricky aspects of a potential escalation of the GCC crisis, which has meanwhile calmed down. A closed border would however most likely present a challenge. Despite Qatar's diversification efforts, which have been on the agenda for decades, the country's manufacturing base has been slow to develop, that's why Qatar imports manufactured goods.

Qatar is a sovereign country located in Southwest Asia, occupying the small Qatar Peninsula on the northeastern coast of the Arabian Peninsula. Its sole land border is with Saudi Arabia to the south, with the rest of its territory surrounded by the Persian Gulf. Oil and gas have made Qatar the world's highest per-capita income country and the country with the lowest unemployment. Proved oil reserves in excess of 25 billion barrels should enable continued output at current levels for about 56 years.

The standard customs duty is 5% but there are exemptions for certain items. There is a single-column tariff. Duties are ad valorem assessed on the Cost, Insurance and Freight (CIF) value:

Qatar is a member of the World Trade Organization (WTO) and is in the process of liberalising trade policies.

It is required by law to have an import license for almost all products and are issued only to Qatari nationals. Imports of alcoholic liquor, firearms, ammunition and dangerous drugs are strictly controlled. Importing and distribution of pork products and alcoholic beverages are highly restricted. The Government of Qatar may ban import of religious or politically sensitive items.

Outer packages should bear the consignee and port mark and should be numbered (according to packing list) unless their contents can be otherwise readily identified.

Labels on foodstuffs must have the following information:

No special packing requirements, but goods should be securely packed to guard against rough handling, extreme heat in summer, humidity in winter and periods of storage in the open. Steel strapping is recommended.

It is recommended that livestock be provided with sanitary certificates, even though they will be examined by local health authorities on arrival.

Plants and plant products, including flour, wheat, rice and seeds, require phytosanitary certification issued by the approved authority in the country of origin.

Exporters should check with their representatives in Qatar to ensure that all necessary conditions are met.

Pharmaceutical products require registration with the Ministry of Public Health.

Shippers should ensure that foodstuffs avoid contamination during shipment.

Foodstuffs must be shipped direct to Doha - transhipment through any other port is not permitted.

All imported beef and poultry products require a health certificate and a halal slaughter certificate issued by an approved Islamic centre in the country of origin.

Pro-forma invoices for government purchases are to be provided and must:

Recommended in all other cases as it facilitates establishment of letter of credit.

Must be legalised by the Commercial Department of the Qatari Embassy in the country of origin or by the customs authority at the point of entry into Qatar. Legalisation fees are levied on the basis of invoice value and range.

Not compulsory but facilitates clearance.

Normal commercial practice but must be with a company with no Israeli connections.