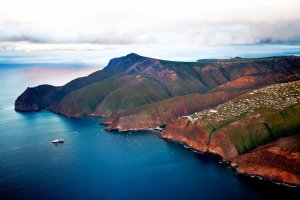 Saint Helena is a volcanic tropical island in the South Atlantic Ocean, 4,000 kilometres east of Rio de Janeiro and 1,950 kilometres west of the Cunene River, which marks the border between Namibia and Angola in southwestern Africa.

The economy of Saint Helena depends largely on financial assistance from the United Kingdom. The country's local population earns income from fishing, the raising of livestock, and sales of handicrafts. Because there are few jobs, a large proportion of the work force has left to seek employment overseas.

The ocean is the first and the most important source of living for the country, bringing the hugest  income while selling fish, crustaceans and aquatic invertebrates. The water is full of anemones, urchins, sea cucumbers, and eels, which all live on the reefs along with turtles, conch and many varieties of marine fishes. The marine aquafauna is rich in conch, which has pearly-pink shells. Its meat is a favorite food supplement for export. Other species of fish which are recorded close to the shore line in shallow waters are: sergeant majors, the blue chromis, brown chromis, surgeon fish, blue tangs and trumpet fish.

Despite the fact that the teritory of the country is rocky and stony, the country is well-known for its food and agricultural produces export. Saint Helena produces and exports a unique coffee bean, grown from plants that directly descend from the original seeds brought to the island from Yemen in 1733. 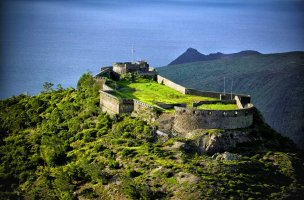 Until 1966, Saint Helena had a monocrop economy based on the cultivation and processing of New Zealand flax for rope and string. Saint Helena's economy is now very weak, and the island is almost entirely sustained by aid from London. There are no minerals and most of the land is unsuitable for farming, except on a small scale.

$14.434 million of imports were made in 1995, imported commodities including: food, beverages, tobacco and tobacco substitutes, fuel oils, animal feed and many others.

The country focuses on creating strong logistic infrastructure o its territory. The deficit of roads influences badly local economy as well as its position on international market. In such a way, the country is obliged to import construction materials and engineering as well as machinery and mechanical appliances.

The government of the country plans to open a big airport on the territory of the island in order to connect with all the world’s corners. In such a way, the country has to import aerospace and defense products as well as aircraft equipment.

The country imports small boats, such as canoes and kayaks and rigid inflatable boats in order to transport different products from one part of the country into another one as well as to connect with the neighbor countries and develop the fishing industry.

St Helena, one of the remotest jurisdictions in the world, is introducing ASYCUDA (Automated System for Customs Data). Saint Helena Cutoms Office is the one responsible for establishing customs standards in the country.  The main responsibilities of this office are the following:

1. Prepare, frame, modify, or amend customs standard specifications for quality of commodities, processes, practices and services imported into, produced or provided in, imported or exported from different countries;

4. Approve the use of customs standards mark for products and commodities or services complying with Saint Helena standards;

5. Undertake educational work and promotion in connection with customs standardization and quality control;

6. Collect and disseminate information relating to customs standards and related matters, including the publication of reports, pamphlets, booklets, journals, and any other publications;

7. Maintain a library and publish and print documents including customs standards;

- baby items and baby food - rate of duty is free;

- meat and meat products - rate of duty is free;

Two copies of the freight invoices in English are required.  No specific form is required, but all invoices must contain the names of the exporter and consignee, number and types of packages, marks and numbers on the packages, net and gross weights, CIF value, terms of sale, and a thorough description of the merchandise.  Note that the importer will usually need a signed duplicate invoice to speed the release of the imported goods from customs.

Every importer or exporter has to prove the origin of the products buy preparing a Certificate of Origin. Two certified copies are required.

A packing list is not legally required, but such lists are usually considered essential in accelerating the time required for customs clearance.

There are no regulations specifying content of a bill of lading.  Importers should include clear marks of identification and the name and address of the consignee of the goods.  Shipping marks on the goods must correspond exactly to numbers on bills of lading/invoices.

Persons wishing to import goods are required to attach six copies of this invoice to the application for an import license and/or the intent to import.  A pro-forma invoice may also be required when presenting an application to Saint Helena authorities to ship bonded goods through the country.

- Firearms and ammunition unless accompanied by a valid license;

- Fruit, vegetables and plant material unless accompanied by an import permit issued by the Chief Agricultural & Natural Resources Officer, together with phytosanitary and export inspection certificates from country of origin;

- Animals unless accompanied by a permit issued by the Chief Agricultural & Natural Resources Officer, St Helena.