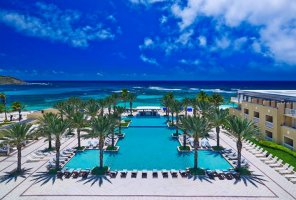 St. Maarten's economy is based on tourism accounting for 80% of the economy and about four-fifths of the labor force is engaged in this sector. Nearly 1.8 million visitors came to the island by cruise ship and roughly 500,000 visitors arrived through Princess Juliana International Airport in 2013. Cruise ships and yachts also call on Sint Maarten's numerous ports and harbors. Limited agriculture and local fishing means that almost all food must be imported. Energy resources and manufactured goods are also imported. Sint Maarten had the highest per capita income among the five islands that formerly comprised the Netherlands Antilles.

As an island in the Caribbean, Saint Martin enjoys the kind of weather and natural geography that supports tourism. Its proximity to the rest of the Caribbean has also provided economic benefits with the airport serving as the main gateway to the Leeward Islands and the larger post-Panamax cruise ships making regular stops to the island. For more than two centuries, exports have generally been salt and locally grown commodities, like sugar.

The island offers duty-free shopping. There are few business restrictions to hinder growth. Though the French (north) and Dutch (south) parts differ slightly in terms of their economies and types of tourists, they share the Caribbean's largest lagoon, which has been populated by yachts.

The top export partners of Saint Maarten are the United States, Belgium-Luxembourg, France, the Netherlands and Sweden. 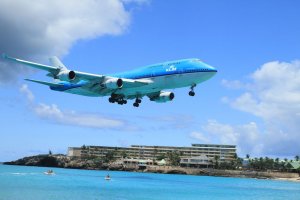 St. Maarten enjoys a Duty Free status with no import or export taxes. This allows for the tariff free importation of raw materials for construction and manufacturing as well as tax free exportation of finished goods to be sold in foreign markets. These attributes make St. Maarten ideal for investment. Furthermore, as an overseas country of the Netherlands, St. Maarten receives more favorable trade relations with the European Union making exports to that market more viable.

The Euro the official currency in Saint Martin (French/North). The island has a high import dependency, making the it vulnerable for strong price fluctuations of both oil and foodstuffs.

Air transportation to Saint Martin and the whole island is served by Princess Juliana International Airport, which is well known for its very low final approach landings close to a popular beach at the end of the runway. Winair (Windward Islands Airways) has its headquarters on the grounds of the airport. There are no railroads on the island.

St. Maarten's economy is mostly based on tourism, either from tourists staying on the island or day tourists from the many cruise lines that dock in the Philipsburg Harbor.

The top import partners of Saint Maarten are the United, the Netherlands, France, the United Kingdom and Switzerland.

Even if Saint Martin is a part of the customs territory of the European Union, the island has a special “free port” status, which means that products imported into the territory aren't subject to any import tariffs. The only existing customs tariff is levied on petroleum products. VAT taxes, as well as excise duties,  also do not exist in Saint Martin.

The French Overseas Departments, such as the Collectivity of Saint Martin, Reunion Island, French Guiana, Guadeloupe and Martinique are a part of the customs territory of the EU, but they are not a part of its fiscal territory. As a result, the same documentary requirements as for trade with the EU countries are imposed.

Importers are required to provide the following documents:

Details can be found on the official website of the Ministry of Agriculture: