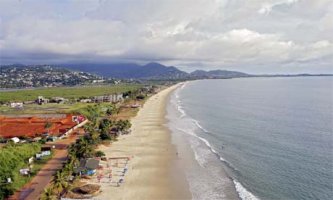 Sierra Leone is a poor country affected by Civil War. Nearly half of the working-age population engages in subsistence agriculture. The country possesses substantial mineral, agricultural, and fishery resources, but it is still recovering from a civil war that destroyed most institutions before ending in the early 2000s.

Agriculture is the largest employer with 80 percent of the population working in the sector.  Rice is the most important staple crop in Sierra Leone with 85 percent of farmers cultivating rice during the rainy season and an annual consumption of 76 kg per person.

Rich in minerals, Sierra Leone has relied on mining, especially diamonds, for its economic base. The country is among the top ten diamond producing nations. Mineral exports remain the main currency earner. Sierra Leone is a major producer of gem-quality diamonds. Though rich in diamonds, it has historically struggled to manage their exploitation and export.

Sierra Leone has one of the world's largest deposits of rutile, a titanium ore used as paint pigment and welding rod coatings. 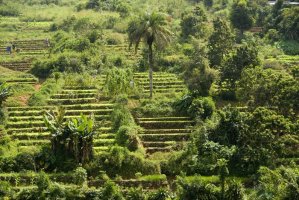 Sierra Leone's economy is highly dependent on mineral exploitation. Much of the formal economy of Sierra Leone was destroyed in the country's civil war. Since the end of hostilities in January 2002, massive infusions of outside assistance have helped Sierra Leone begin to recover.

Much of the recovery will depend on the success of the government's efforts to limit corruption by officials, which many feel was the chief cause for the civil war. A key indicator of success will be the effectiveness of government management of its diamond sector.

There is high unemployment, particularly among the youth and ex-combatants. Authorities have been slow to implement reforms in the civil service, and the pace of the privatization program is also slackening and donors have urged its advancement.

The currency is the leone. The central bank is the Bank of Sierra Leone. Sierra Leone operates a floating exchange rate system, and foreign currencies can be exchanged at any of the commercial banks, recognized foreign exchange bureau and most hotels. Credit card use is limited in Sierra Leone, though they may be used at some hotels and restaurants.

Sierra Leone is a country situated in West Africa, bordered by Guinea, Liberia and the Atlantic Ocean. Sierra Leone is a member of the United Nations, African Union, Economic Community of West African States (ECOWAS), Commonwealth of Nations, the African Development Bank and other international organizations.

Sierra Leone applies a MFN treatment to all its trading partners. The average MFN tariff, including the excise tax and ECOWAS levy, is 14.9%.  The average applied MFN tariff for industrial products is 13.5% and 16.5% for agricultural imports.

Sierra Leone applies the ECOWAS supplementary duty of 0.5%, which is levied only on imports from third countries.  Sierra Leone also applies an excise tax of 30% on certain imports and a sales tax of 17.5% on both domestic and foreign products.

Imported products must be accompanied by a certificate of origin.

A special permit, issued by the Ministry of Agriculture, Forestry and Food Security, is required for the importation of plants, seeds, soil and other imports mixed with soil.

The importation of arms and ammunition and explosives is restricted.

A phytosanitary/fumigation certificate has to be issued by the Ministry of Agriculture and Food. The Ministry charges a fee for fumigating the goods, as well as for issuing the certificate.

Gold and diamonds are subject to export licensing requirements.

A special permit issued by the Ministry of Agriculture and Natural Resources is required for the exportation of plants and charcoal.

Sierra Leone has no special marking, labelling, or packaging requirements other than the Price Tag Order 1956, which requires traders to display prices on the shelves to help reduce the exploitation of vulnerable or illiterate citizen, and the Weights and Measures Act 1961.1.

The main documents required for customs clearance are:

- a clear report of findings and an import duty report

- a bill of entry

- combined certificate of value and origin, and import declaration

- special certificate for goods such as medicine, caustic soda, and salt