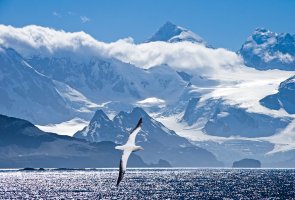 There is no permanent population on the islands. The present inhabitants are the British Government Officer, Deputy Postmaster, scientists, and staff from the British Antarctic Survey who maintain bases at Bird Island and at the capital, King Edward Point, as well as museum staff at nearby Grytviken. In such a way the country does not have any active economy and completely depends on the British investments.

The country does not import or export different products except fish, crustaceans and aquatic invertebrates. Fishing takes place around South Georgia. The country exports krill fish and cod ice-fish. Fishing licenses bring in millions of pounds a year, most of which is spent on fishery protection and research. 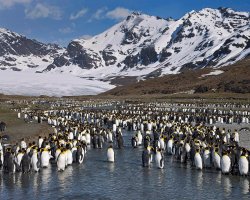 South Georgia and the South Sandwich Islands are of global significance as a relatively pristine and rich environment that sustains major populations of seabirds and marine mammals including globally threatened species, like the iconic wandering albatross. South Georgia is also home to one of the longest and most detailed scientific data-sets in the Southern Ocean, with over 30 years of population data on seabirds and marine mammals at Bird Island. South Georgia waters are highly productive, supporting a large biomass of krill, on which many marine predators depend. The waters around South Georgia have also been identified as a globally important location for marine benthic biodiversity, but that biodiversity is under threat from rapid regional warming. In contrast to South Georgia, the South Sandwich Islands are rarely visited and information on the terrestrial and marine flora and fauna is sparse.

Tourism is one of the main sources of income for the country. As the islands became a real reserve for a large number of birds, thousands of international tourists visit it during the year despite the fact that most of the territory is covered with ice.

Customs requirements of South georgia and the south sandwich islands

South Georgia and the South Sandwich Islands is a British Overseas Territory in the southern Atlantic Ocean.  Stunningly beautiful and rugged, this island wildlife sanctuary, once visited, is not easily forgotten. Its snow covered peaks, blue glacier ice and emerald green bays are breathtaking sights.