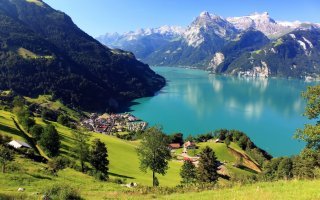 Switzerland's most important economic sector is manufacturing. Manufacturing consists largely of the production of specialist chemicals, health and pharmaceutical goods, scientific and precision measuring instruments and musical instruments. Exported services amount to a third of exports. The service sector - especially banking and insurance, tourism, and international organisations - is another important industry for Switzerland.

Trade has been the key to prosperity in Switzerland. Switzerland's exports accounts for 50% of its GDP. 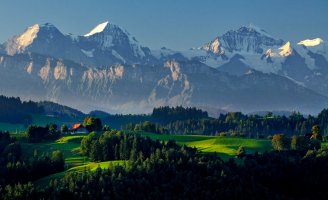 The economy of Switzerland is one of the world's most stable economies. Its policy of long-term monetary security and political stability has made Switzerland a safe haven for investors, creating an economy that is increasingly dependent on a steady tide of foreign investment.

Because of the country's small size and high labor specialization, industry and trade are the keys to Switzerland's economic livelihood. Switzerland has achieved one of the highest per capita incomes in the world with low unemployment rates and a balanced budget. The service sector has also come to play a significant economic role.

Switzerland is a country situated in Western and Central Europe, bordered by Italy, France, Germany, Austria and Liechtenstein. It is a member of the Euro-Atlantic Partnership Council, European Free Trade Association (EFTA), International Chamber of Commerce, World Trade Organization, Organization for Economic Cooperation and Development (OECD) and other international organizations.

The Swiss customs tariff, is based on the internationally valid Harmonized System (HS). The first six digits of the eight digit Swiss tariff headings correspond to the HS.

CE marking is not required in Switzerland.

Although not part of the EU, Switzerland is a member of the European Free Trade Association (EFTA). To facilitate free trade with the EU, Swiss legislation has adapted to EU law in several areas.

There are different requirements with regard to product safety. Suppliers and manufacturers need to ensure products are safe under Swiss regulations. Products have to:

You should translate your documentation to one or more of Switzerland’s four main languages; German, French, Italian or Romansch.

Being a member of European agency for standards (CEN), Switzerland adopts any new European standards in reconciliation with any conflicting national standards.

The harmonised standards may be ordered from the Swiss Association for Standardization (SNV).

Quotations should be in Swiss Franc (CHF) or dollars.

The most popular payment method by which Swiss importers send payment to their foreign suppliers is by electronic funds transfer.

The letter of credit is still used in some industry sectors, but covers a fraction of total imports, largely due to its cost and time requirements and ease in obtaining credit ratings, which increases transparency and transactional safety.

This may occasionally be requested by the importer. A minimum of two copies is required.

No prescribed form and a minimum of two copies is required. The invoice must include:

No special requirements. To Order bills are acceptable.

Not obligatory but simplifies clearance if a variety of goods are packed in different cases.