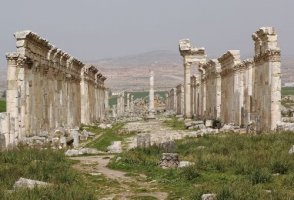 The economy of Syria relies upon inherently unreliable revenue sources such as dwindling customs and income taxes which are heavily bolstered by lines of credit from Iran. Iran is believed to spend between $6 billion and $20 billion USD a year on Syria during the Syrian Civil War. The Syrian economy has contracted 60% and the Syrian pound has lost 80% of its value, with the economy becoming part state-owned and part war economy. At the outset of the ongoing Syrian Civil War, Syria was classified by the World Bank as a "lower middle income country." In 2010, Syria remained dependent on the oil and agriculture sectors. The oil sector provided about 40% of export earnings. Proven offshore expeditions have indicated that large sums of oil exist on the Mediterranean Sea floor between Syria and Cyprus. The agriculture sector contributes to about 20% of GDP and 20% of employment. Oil reserves are expected to decrease in the coming years and Syria has already become a net oil importer. Since the civil war began, the economy shrank by 35%, and the Syrian pound has fallen to one-sixth of its prewar value. The government increasingly relies on credit from Iran, Russia and China.

Since the civil war started, Syria has been unable to trade due to international sanctions. Oil used to dominate foreign trade and accounted for 67 percent of Syrian exports before the war. Syria’s other exports included fuels, calcium phosphate, sheep, tomatoes, electricity, cotton, chemicals, eggs, apples and pears, refined copper. 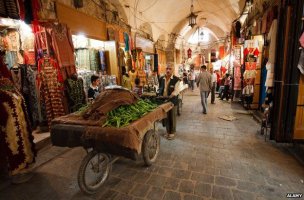 Before the war, Syria was a country in the middle range of economic growth and prosperity. Oil and agriculture were the backbone of Syrian exports for many years. Agriculture is o­ne of the cornerstones of the Syrian economy. Another major cornerstone of Syrian economy falls into the industrial sector. A large percentage of imports have been raw materials and equipment for the agricultural and industrial sector. Approximately a third of the gross domestic product and labor force of Syria is employed throughout the industrial sector. It has benefited in recent decades from opening of regulations allowing private financing and investment. For many years much of this sector was under state control.

One of the final, major points of the Syrian industry comes in traditional means. Syrian craftsmen still produce fine furniture and clothing. Dried fruit packing is as popular as a business as it has ever been. Regardless of the industry, Syria is a country long involved in trade and commerce. Its advantageous location o­n major East-West trade routes have ensured the Syrian people have a shrewd understanding of business.

Since the civil war started, Syria has been unable to trade due to international sanctions. Syria’s main imports are fuels, sugar, grains, iron and steel, cigarettes, plastics, vehicles and soy beans.

Syria is a country situated in Western Asia, bordered by Lebanon, the Mediterranean Sea, Turkey, Iraq, Jordan and Israel. Syria is a member of the International Chamber of Commerce (ICC), International Organization for Standardization (ISO), United Nations Conference on Trade and Development (UNCTAD), World Customs Organization (WCO) and other international organizations.

Syria currently has free trade arrangements with Kuwait, Bahrain, Qatar, Sudan, Oman, Morocco, Algeria, Tunisia, Egypt, and Libya. Under those agreements, Syria will reduce customs duties on locally produced goods until January 1, 2005, at which point customs duties will be eliminated. As of January 1, 2002, Syria and Lebanon eliminated all customs duties by bilateral agreement. Customs duties on goods imported from Jordan, Saudi Arabia, Iraq, and the UAE were also lifted in accordance with bilateral agreements. Although some exemptions for locally manufactured products remain, imports of electrical appliances, chocolates, fruit juices, mineral water, cosmetics, and ceramics, which were formerly prohibited from all foreign countries, are now permitted from Arab countries.

Duty rates are progressive and range from 1%-200%, depending on the government's view of the necessity of a product. Food and industrial raw materials carry relatively low rates, while rates between 150%-200% are imposed on "luxury" items such as automobiles.

The unified tax is a surcharge on all imported goods, and its proceeds are allocated to the military, schools, and municipalities. Unified tax rates range from 6%-35% and are collected by the Customs Department. Customs procedures are cumbersome, tedious, and time-consuming because of complex regulations. Importers often complain that it may take up to six months to import spare parts. Both international financial institutions and the European Union, which is working with the Syrian government on economic and financial sector reforms, have recommended simplification of the customs tariffs and unification of customs exchange rates.

To import goods into Syria, Syrian traders must present the following documents:

- Commercial invoice in triplicate describing the type of goods imported, price, basic specifications, and method of payment used. Payment by means of documentary letter of credit is to be gradually implemented in future commercial transactions. The exporter should also include two statements on the invoice:

- Certificate of Origin in triplicate

- Letter from the corresponding bank

Boycott provisions: Syria enforces the Arab League Boycott of Israel. Goods of Israeli origin may not be imported into Syria. In addition, all imported goods must come directly from the country of origin, with some exceptions.

The general model for export of most items from Syria is to apply to the Syrian Ministry of Economy and Foreign Trade for permission. The Ministry will then determine if the goods you wish to export are subject to a tax or fee. Some Syrian goods may only be exported by the public sector only (oil, cotton, etc.), some are subject to export tax, and some are exempt from fees and taxes.

To export, a Syrian company must be registered with any Syrian Chamber of Commerce, Industry, or Agriculture and prepare the following documentation:

- Invoice certified by the local chamber to which the firm belongs

Foreign importers of Syrian goods need not worry about Syrian export controls, as there are experienced local shipping agents who can take charge of all export responsibilities. Inquiries should be addressed to the Foreign Trade Center, or to the Inspection and Control Company (CONEX) of the Federation of Syrian Chambers of Commerce.

Medicines, food, dairy, garments, and other consumer products must be labeled. The labeling should include: name of producer/exporter, ingredients, date of manufacturing, date of expiration, as well as the country of origin.

Medications also require a batch number. Labeling is now enforced for products designed for local consumption, according to the international standards, as issued by the Ministry of Supply and the Ministry of Industry.