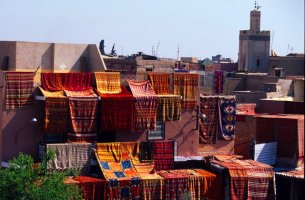 Moroccan economy is based upon its major resources - agriculture, phosphates, and tourism. Sales of fish and seafood are important as well. Industry and mining contribute about one-third of the annual GDP. Morocco is the world's third-largest producer of phosphorus after China and the United States, and the price fluctuations of phosphates on the international market greatly influence Morocco's economy.

The production of textiles and clothing is part of a growing manufacturing sector that accounted for approximately the third of total exports in the last years, employing 40% of the industrial workforce. The government's goal is to increase textile and clothing exports.

Morocco exports citrus fruits and early vegetables to the European market. Morocco's wine industry is developed, and production of commercial crops (cotton, sugarcane, sugar beets, and sunflowers) is expanding. Newer crops such as tea, tobacco, and soybeans have passed the experimental stage, the fertile Gharb plain being favourable for their cultivation.

The fishing industry in Morocco is a leading foreign exchange earner, accounting for 16% of total exports. For a long time the industry has been an economic pillar for the country. The Kingdom is considered the largest fish market in Africa. 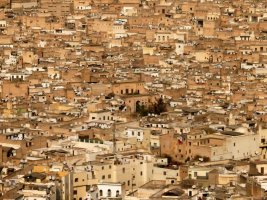 Morocco's economy is considered a relatively liberal economy governed by the law of supply and demand. Since 1993, the country has followed a policy of privatization of certain economic sectors which used to be in the hands of the government. Government reforms and steady yearly growth in the region helped the Moroccan economy to become much more robust compared to earlier years.

It is a country with intermediate income (lower bracket) and emerging financial market. The economic system of the country presents several facets. It is characterized by a large opening towards the outside world. France remains the Morocco's primary trade partner (importer and exporter) of Morocco. France is also the primary creditor and foreign investor in Morocco. In the Arab world, Morocco has the second-largest non-oil GDP.

Morocco is an influential member of the Arab League and a part of the Union for the Mediterranean. Morocco has become a major player in the African economic affairs, and is the fourth-largest economy in Africa.

Morocco's trade is based on various free trade agreements that the country has signed with its principal economic partners. Among major Morocco imports are textiles, fabric, telecommunications equipment, gas and electricity, transistors, plastics.

Export Portal thinks globally, that is why we pride ourselves on offering a wide variety of mineral products from salt to wax to cement and fuel offered for sale by reliable global mineral products manufacturers, exporters and suppliers. Go to Export Portal's Mineral Products Section to buy or sell online Salt, Sulfur, Stone, Cement, Plaster, Fuel and Oil,Mineral Wax, Bitumen, Baryte, Bentonine, Mica, Vermiculite and Silica.

Export Portal is the world's leading online shopping portal filling the demand formineral products and hundreds of other products to serve industries and the small quantity buyers.

Morocco, officially the Kingdom of Morocco, is a country in the Maghreb region of North Africa. Geographically, Morocco is characterized by a rugged mountainous interior and large portions of desert. It is one of only three countries (with Spain and France) to have both Atlantic and Mediterranean coastlines.  A historically prominent regional power, Morocco has a history of independence not shared by its neighbours. Its distinct culture is a blend of Berber, Arab, Sub-Saharan African, and European influences. Morocco claims the non-self-governing territory of Western Sahara as its Southern Provinces.

Morocco has a population of over 33.8 million, its political capital is Rabat, the largest city is Casablanca. One of the largest cities is Marrakesh which walled medina, a mazelike medieval quarter, offers entertainment in its Djemaa el-Fna square and souks (marketplaces) selling traditional ceramics, jewelry and metal lanterns.

The importing of goods is governed by the working balances convertibility regime; therefore, it is exempt from authorization from the exchange control office. To regulate imports, operators must sign a domiciled import paper from a Moroccan bank. Import papers allow the goods to be cleared through customs and be financially regulated.

All products may be imported except for retreaded or used tires, explosives, and used clothing.

Safeguard and anti-dumping measures may be taken against products that cause or risk causing serious harm to national production.

Import-related insurance must be paid to a Moroccan insurance company; however, some goods for which the import paper is labelled CIF may be regulated if they are included in the list below and the importer is compelled to accept insurance abroad:

Importers also have the option of making advance payments of up to 40% for capital goods imports or up to the equivalent amount in national currency of 200,000 DH for certain imports.

To finance their imports, operators have the option of entering into contracts with foreign lenders for lines of credit and buyer and supplier credits.

Of course, operators also have the option of accepting the services of factoring corporations to guarantee foreign suppliers that import bills will be collected and paid.

This tax is imposed on imported goods except for the following:

Import duty ratios vary according to the nature of the imported product, and they have been reduced to the following six percentages: 2.5%, 10%, 17.5%, 25%, 35%, and 50%. However, capital goods, materials, and equipment as well as their parts, spare parts, and accessories are subject to a rate of either 2.5% or 10% ad valorem under the investment charter.

Until July 1, 2000, the import fiscal levy (15% rate) was added to the customs duties on all imported goods, but for increased transparency, the Moroccan customs administration combined the fiscal levy and the import duty under the name import duty.

Although Morocco has reduced barriers to trade by liberalising controls and customs clearance in the last 10 years, there is still a substantial level of protection.

Commodity prices are determined by the market with the exception of items such as petrol, vegetable oil, flour and sugar. Morocco introduced a tariff system for major staples – grains, oil seeds and sugar. While the system has resulted in more stable local prices of imports, there are significantly higher duties on low priced imports.

The customs authorities will not give a binding ruling on customs classification in advance. An informal advisory opinion may be obtained from the Director General des Douanes (Customs office).

While the government does not require locally registered firms to apply ISO 9000 standards, most multinational firms use the system.

There is a free trade zone in Tangiers, which is open to foreign investors and businesses. Companies in the zone can import goods duty-free and are exempt from most taxes for export production. Another free trade zone is planned for Nador.

There are no special regulations for marking the exterior of containers bound for Morocco. For ease of identification and clearance through customs, an indication on the outer containers of the net weight in kilograms and other identification markings is useful.

Food labels can be in French or Arabic and must show country of origin. Local and imported canned foods and beverages must have the date of production and the expiration date printed on the can.

A commercial invoice is required and must describe the goods in French. No special invoice form is necessary. Certification of country of origin is required. Payments are made through bank-to-bank irrevocable letters of credit. Pro-forma invoices must be provided in most cases.

Invoices on company letterhead are required for both import licenses and foreign exchange transfers. 'To order' bills are acceptable as bills of lading. When sending promotional material, especially promotional videos, state in French 'Promotional use only' and 'No Commercial Value'.

Goods imported under a temporary entry provision must be approved by decree of the Finance Ministry. Customs may authorise entry of goods on an individual basis. The limit for temporary entry is six months, renewable for up to one year.