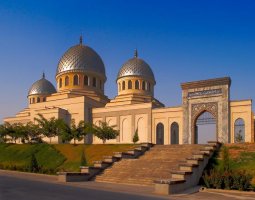 Along with many Commonwealth of Independent States (CIS) economies, Uzbekistan's economy declined during the first years of transition and then recovered after 1995, as the cumulative effect of policy reforms began to be felt.

Economic production is concentrated in commodities. In 2011, Uzbekistan was the world's seventh-largest producer and fifth-largest exporter of cotton as well as the seventh largest world producer of gold. It is also a regionally significant producer of natural gas, coal, copper, oil, silver and uranium. Uzbekistan's external position has been strong since 2003. Thanks in part to the recovery of world market prices of gold and cotton (the country's key export commodities), expanded natural gas and some manufacturing exports, and increasing labor migrant transfers, the current account turned into a large surplus (between 9% and 11% of GDP from 2003 to 2005) and foreign exchange reserves, including gold, more than doubled to around US$3 billion.

As a producer of oil, natural gas, gold, and as the second largest exporter of cotton, natural resources dominate the country's exports. Uzbekistan's exports also include machines and equipment, cars, refined copper, radioactive chemicals and food. 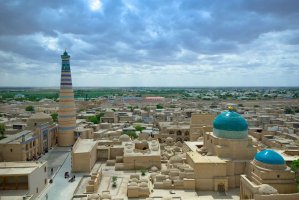 Since gaining independence, the Government of Uzbekistan has stated that it is committed to a gradual transition to a market-based economy. Uzbekistan's growth has been driven primarily by state-led investments and a favorable export environment.

The government of Uzbekistan restricts foreign imports in many ways, including high import duties. Excise taxes are applied in a highly discriminatory manner to protect locally produced goods. Official tariffs are combined with unofficial, discriminatory charges resulting in total charges amounting to as much as 100 to 150% of the actual value of the product, making imported products virtually not affordable. Import substitution is an officially declared policy and the government proudly reports a reduction by a factor of two in the volume of consumer goods imported. A number of CIS countries are officially exempt from Uzbekistan import duties.

There are three types of import taxes in Uzbekistan:

- customs duties on imports (henceforth referred to as tariffs)

- excise taxes that are levied on imported goods

Duties are based on the CIF cost of the goods. Duties are payable in Uzbek currency (UZS) at the rate of exchange set by the National Bank of Uzbekistan on the day of customs clearance.

There is a customs surcharge (processing fee) of 0.2% of customs value. A 20% Value Added Tax is levied on the duty value. Excise tax is levied in addition to VAT on certain luxury goods such as alcohol and cigarettes.

The country’s legislation provides for antidumping and countervailing duties, but no such duties have been imposed in practice.

Many goods are subject to an ad valorem tariff or a specific tariff, whichever is greater. There are also compound tariffs which are a combination of an ad valorem and a specific tariff. To protect domestic producers, tariffs on many imported final goods, such as automobiles, furniture and textile products, are quite high, while tariffs on raw materials, intermediate goods, machinery and equipment are generally low.

In what appears to be an internal inconsistency in Uzbekistan’s trade regime, a non-zero tariff (which raises the domestic price of the taxable commodity) is levied even on some goods whose exports are prohibited or licensed to keep their domestic prices down (such as grains, flour, meat and sugar).

The time needed to export from and import to Uzbekistan has reduced over the past few years, but still it remains quite long. The country’s land-locked location far away from major seaports is one reasons for this, and why the cost of exporting from and importing to Uzbekistan is high.

Certain products such as radioactive materials, explosives, pharmaceuticals, chemicals, biological substances, rare metals are restricted to import in to Kazakhstan. The importer well in advance of importing such goods to Uzbekistan must apply for the special import license. Receiving an import license is complicated and can take up to three months or longer period. The importer/exporter may be required to provide samples for analysis along with the complete technical data in Russian to facilitate the process. Import licenses are frequently restricted to time limits and quantity as well. So be sure to check with Globalink prior to shipping such items to Uzbekistan.

Documents required for registration of company as importer/exporter at customs office:

(All documents must be notarized copies.)

1. Company’s Charter or Article of Association (not required for Representative Offices)

1. Application requesting the head of Customs department for the registration of the company as an importer/exporter in customs data bank.

1. Certificate from tax inspection confirming the company is in good standing with the tax department.